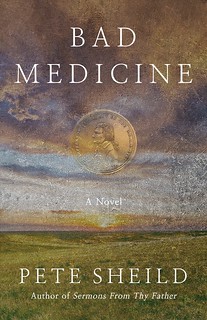 When Dr. Peter Sheild (Oconomowoc) retired from his general dentistry practice in 2016, his plans included muskie fishing and snowmobiling in Vilas County, as well as continuing to volunteer, exercise, and spend time with his wife and family in Oconomowoc.

Six years later, he’s a published author, with two books and a second career as a writer that he didn’t exactly see coming.

“I wish I could tell you about an “a-ha!” moment that made me decide to be a writer,” said Dr. Sheild. “I received some inspiration from my son who writes an online newsletter as a hobby, and my brother has done some writing. It just so happens that the stories I was interested in telling ended up mushrooming into books.”

Dr. Sheild’s father, the Rev. John Sheild, ultimately inspired the first book. The elder Sheild was cleaning his home and throwing things out and found a few boxes of sermons from his first church in Redfield, South Dakota, where Dr. Sheild lived as a child. His father offered, but Dr. Sheild originally declined to keep the sermons. A week later, however, a creative idea led him to change his mind. Several years before that, Dr. Sheild started an oral history with his father about his journey into ministry. He decided the content of the oral history and the sermons together would be perfect for a book. Luckily, he was able to get his hand on a box
of the sermons before they were all tossed. He started formally writing in 2017 with the help of his son, and his first book, “Sermons From Thy Father: The South Dakota Years,” was written and published in 2018.

Dr. Sheild found that – like dentistry – writing challenges both the intellectual and creative parts of his brain, something he was craving in retirement. As a lifelong learner, continuing to learn and improve his writing brings him joy.

This enjoyment prompted his latest book, “Bad Medicine,” which he started writing in the fall of 2019. “With ‘Bad Medicine,’ I started to write a story and it ended up metamorphosing into a book,” he said. “Starting the novel early in the pandemic helped, too, because we were locked down and it gave me a chance to sit down and write.”

A historical fiction novel, “Bad Medicine” was inspired by Dr. Sheild’s love of reading; a lifelong fascination with the history of the west – explorers, trappers, Indian tribes and geology; and frequent trips to South Dakota. The book focuses on the story of an archaeology professor and his grandson who travel to South Dakota to dig in Native American burial sites in hopes of finding the Thomas Jefferson Peace Medal, the Holy Grail of artifact collecting.

The positive feedback he’s received from peers on “Bad Medicine” has been humbling and encouraging. Fellow authors have shared that it’s “an adventurous, engaging, page-turner,” and “a fast-paced story with a
unique premise and a fresh take on the classic treasure- hunter story.” Dr. Sheild is working on the sequel to “Bad Medicine” and hopes to have that published in late 2022. He also recently published a flash fiction
story, “Playing With Sticks,” in Gastropoda Literary Magazine. Flash fiction is a type of prose narrative that is very brief with a maximum of 1,000 words.

“Writing is fun, but it’s hard. Navigating the publishing piece was even more challenging, given I had no experience with the industry,” said Dr. Sheild. “I don’t have any big goals with my writing, although I’m considering
another sequel to complete the trilogy. I’m just enjoying the craft, trying to get better, and learning all the time.”

In addition to writing, Dr. Sheild serves on the state’s Dentistry Examining Board. “I have really enjoyed being on the DEB,” he said. “Our members should know the level of commitment and passion by the board for our profession is outstanding. It’s a privilege and an honor for me to serve.”

When asked to give advice to current dentists, Dr. Sheild recommended taking up a hobby outside of dentistry to refresh and rejuvenate. “Don’t stop growing, learning or challenging yourself,” he said. “I believe we
all have vastly more ability and abilities than we give ourselves credit for. Tap into the things you’ve always wanted to try. We only get one spin, so make the most of it!”